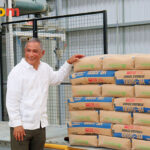 Belize has its first cement plant capable of supplying local demand and the CARICOM export market. The Cementos Rocafuerte plant is an investment from Guatemala-based Cementos Progreso that for years now has been exporting bagged cement to Belize, along with other manufacturers in Mexico and Central America. Sited on a 25 acre facility at mile 34 near the capital Belmopan, the … END_OF_DOCUMENT_TOKEN_TO_BE_REPLACED

The government of Belize has made commercial fishing open to foreigners that have residence in Belize. The move came about by Statutory Instrument #57 of 2021, signed by fisheries minister Abner Perez. Traditionally, commercial fishing in Belize has been reserved for nationals of Belize. Recent years have seen the incursion of foreign fishermen from neighbouring countries like … END_OF_DOCUMENT_TOKEN_TO_BE_REPLACED

Press reports have confirmed that the Geology Department has put together a team of personnel from the Forestry Department, firefighters, and local tour guides to embark on a 7-hour hike to investigate the cause of heavy billows of smoke that have been emitting from the Sleeping Giant mountain situated on the Hummingbird Highway near Hershey's Cacao Farm in southern Belize. The … END_OF_DOCUMENT_TOKEN_TO_BE_REPLACED

After spending eight days on remand at the Belize Central Prison, Jasmin Hartin, the wealthy socialite accused of killing Police Superintendent Henry Jemmott, was granted Supreme Court bail this Wednesday 9 June 2021. She is free on bail after being released from the prison in the evening. For the hearing, she appeared virtually before Supreme Court Justice Herbert Lord. He … END_OF_DOCUMENT_TOKEN_TO_BE_REPLACED